“The Cave” by Anonymous

The cave is colder than it used to be.

A week ago, I woke up and found this scrawled in the dirt: 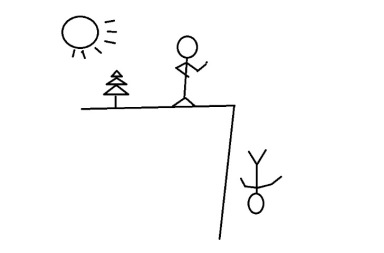 She always had a way with hieroglyphs. A little cryptic, maybe, but that’s why I loved her. I drew a line around it, so as to remind myself not to walk or urinate on it. I should’ve tried that a long time ago. Maybe things would’ve been different. “We’re not animals,” she used to say. Every time I go out or come in, I have step over or around the drawing, making sure not to spoil it.

I spend most of my time hanging out on a boulder near the cave’s mouth, grooming my red cheek hair, my shoulders, my belly, anything I can reach. There are certain parts of my back that, even with my long arms, I just can’t get to, so part of me resembles an osprey nest, matted and interwoven with twigs and leaves, crawling with mites and deer ticks.

I’ve eaten most of the edible berries and mushrooms that grow around our cave. They would’ve lasted about six months if I’d shown more restraint. There’s one more patch of boysenberries about thirty yards from here. Once I eat those I’ll probably need to expand my foraging area or simply find another cave. That might be helpful anyway. I would have to move northeast because of the new highway. Sometimes she and I used to sit and listen as the sounds of the engines shouldered through the trees and the otherwise silent hills, and chat about what the next twenty years would bring.

I sprawl next to our collection of the cameras (SLRs, EVILs, MILCs, disposables, even a camcorder or two) we’ve taken from the overly zealous cryptozoologists and hikers we’ve mugged or spooked over the years. A strip of orange light has crept into the cave. Condensation beads on the walls and collects like sorrow in an impression, like a shallow basin in the rock, just inches from the light’s reach. But when it grows colder, that light will shift, extend. At least I can count on that.

I roll to my side and stare at her drawing a while longer. Finally I close my eyes, grunting, trying to ignore whatever it is that’s biting, burrowing beneath my skin.