Editor-in-Chief Anelise Farris had the opportunity to chat with our upcoming visiting writer Matthew James Babcock. An instructor at BYU Idaho and an accomplished writer, Babcock will be at Idaho State University from February 7-9, 2018. Please see our calendar for an event schedule. Meanwhile, check out the Q&A below! 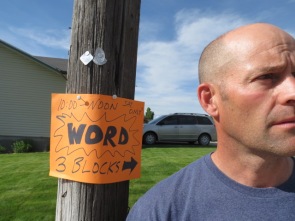 I’m not sure I want writing ever to become more than a hobby.  I think the moment I start thinking about writing as something that others have invited me into a certain professional class to perform, I’ll probably be sunk as an artist.  My favorite pieces are those I wrote largely because I wandered into some subconscious stream and thought of publishing only as an afterthought.  Rather than in some ordained or professional class, I think writers belong in the ranks of public servants, the civil servants of language, the slingers of soup kitchen metaphor, the volunteer fire departments of tragedy, longing, and amazement.  I wrote a book on a minor American poet named Robert Francis—mostly because a study on his life and oeuvre was long overdue—and he gave himself the title “Wordman.”  I’d rather see the world populated with wordwomen, wordkids, and wordmen before I see it glinting and gaudy from another round of coronations, especially among writers.  It can be slippery trying to stand your whole life on the ivory tower.

I think influence is mostly subconscious, so it’s hard to say.  And it’s hard to answer this question without flattering yourself.  Styles I’ve admired and still admire: Whitman, Dickinson, Wallace Stevens, Faulkner, George Eliot, Virginia Woolf, and more contemporaneously, Tim O’Brien, Peter Davis, Amy Newman, Tony Hoagland, Brian Doyle, Anthony Doerr, and most recently Meghan O’Gieblyn.  All these people have astonished me, and I think rather than say they’ve influenced my style—which even as I write it sounds humongously arrogant. I’d have to say they’ve absolutely amazed me and shown me what language can do if you get out of the way and let it fly.

In between.  On the fly.  In transit.  I’ve never had the luxury of any kind of garret or coastal lighthouse or bunker.  I don’t come from a family of writers, and so I’ve had to learn to take my writing with me and finish things flopped on the living room floor after a board game, or sprawled on the couch after a diaper changing or dissertation chapter.  The year my wife and I got married (young, in college), she still had a year to graduate, and so I had this one long delicious year during which I worked about four jobs but basically dropped by the public library, walked around town, and tapped away on my Gateway 2000 computer.  And then when we had three kids, she went to New York with all three to visit her family, and I was left with just the dog and three weeks, and I think during that time I wrote an entire fiction manuscript because I had the time.  But apart from those two brief periods, I’ve been scratching out word after word, line after line, mostly with paper and pad that I carry with me to middle school choir concerts and basketball games and piano recitals.  Sounds tragic, I know, but I’ve found those mundane settings capable of setting of some inner fireworks when you aren’t expecting it.  So always have your writing materials with you.

Well, you never succeed and you never fail.  You never get bored, and there’s always somewhere else to go and something new to try.  Writing is your endless smorgasbord.  I work in multiple genres mostly because I teach multiple genres, and I teach multiple genres because I’ve never felt completely at home in just one.  I was talking to one of my colleagues recently about his fiction writing, and he in turn asked about my writing projects, and when I couldn’t really tell him what I was working on, he said, “You’re a dabbler.”  At first, I bristled at this label, but immediately afterward, I thought, “Hey, I like that.”  Kind of like Yankee Doodle.  It was meant as a slur, but it became a badge of honor.  I wear the dabbler bandolier with a bit of a swagger nowadays.

Always.  But some of my best writing moments have come from teaching.  First off, in my first creative class, twenty years ago, one student raised his hand and asked, “What have you written and published?”  Fresh out of grad school, I had little to say, although I had published a smattering of droll drivel in obscure journals. But that sent me back to my office, and I started writing every day on my lunch hour, which has produced four published books (criticism, poetry, and nonfiction) with two books of fiction to follow and maybe a few stragglers in my twilight years if my eyesight holds out.  One student who failed freshman English three times but then passed it on his fourth try with me wrote a narrative that used such an inventive structure I stole it and modified it to write a longer piece of fiction, “Impressions,” which is in one of my upcoming collections.  During a routine discussion on narrative tense and perspective in another composition class, a student raised his hand and said, “Who’d want to write a story in future perfect tense?” (Future perfect is actually a mood, technically, and not a tense, one of my grammarian friends reminds me).  But I went back to my office and started writing “Future Perfect,” a mini-novella about four generations of an Idaho family, and their different paths toward finding a better tomorrow.  This also became the title story in a second fiction collection that will soon be released.  Here’s Wally Stegner: “To conform to the mores of the pedagogical profession, grind over comma faults and agreement errors and faulty parallelism during working hours, and yet keep close and inviolate a certain artistic integrity which labors to learn the craft of writing. . . . [N]o matter how hard the apprenticeship in pedagogy for the average man, it can be withstood, and it cannot ruin him as an artist.”  I’m not sure I’m withstanding teaching the way Stegner puts it here, but I have found that if you don’t try to keep them separate endeavors, writing and teaching do feed off one another.  Time, of course, is the issue.  There’s never enough while you’re doing both.  But I’ve also found that if I share what I’m writing with my students, it infuses our efforts into a kind of camaraderie, and that keeps me going in both fields.

Mostly Swift for a major author’s course.  I want to try to understand satire because I think there’s an undercurrent of satire in some subterranean cavern in me, and I’ve yet to tap it.  But also The Pushcart Prizes.  The Pushcart Prize anthology is always my big Christmas present to myself.  I just finished the last Best American Essays (and the two best, ta-dah!, awarded by me, are Greg Marshall’s “If I Only Had a Leg” and Meghan O’Gieblyn’s “Dispatch from Flyover Country.”)  George Singleton’s comic Southern fiction has left me dancing in circles, particularly his story “Staff Picks.”  But nobody is going to beat Anthony Doerr in my lifetime.

Orwell.  Defoe.  Jane Austen.  Whoever compiled the New Testament.  And Robert Francis, the subject of my book, a writer I feel like I know but was never able to meet.  I was lucky enough to sup on Sushi with Brian Doyle before he died.  One of the most spiritual experiences I’ve had is listening to Doyle read “Leap” from a student’s cell phone while he walked around and around one of our campus chapels.  When I met Tim O’Brien and Anthony Doerr, I just started babbling like a teenage crush.  It’s hard for me to be around writers I really admire, probably because I’m constantly robed in the fog of my own inadequacies.

I have taught myself to ride a unicycle, juggle, and breakdance.  But I can’t repair cars, and most household appliances are safe in my presence.

It’s going to take your whole life, but what better way to go?