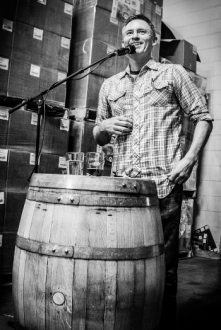 Black Rock & Sage had the opportunity to chat with writer Christian Winn, who will be visiting ISU on Thursday, September 21. His reading and signing will be held in the Bengal Cafe at 5:30pm. Please join us!

I guess, in many ways, I never have considered creative writing a hobby, but something that has always been more akin to a part of both my innate personality and my deep belief in self expression. I’ve always really believed in the poems/stories/novels/essays I’ve written. Not to say that these pieces have always been good, or even close to good, but they have always felt essential and important to me. So, I guess the word hobby, doesn’t quite fit how I ever have thought about my writing.

Oh man, this is a tough question, because there have been so many wonderful writers who have influenced my own creative process, both stylistically and in its essence and understanding of the art and craft of writing fiction. I’ll name ten here, but I could probably roll out fifty, or more, who have had an influence in a couple of ways.

Here goes, in no particular order.

I’d have to say, the issue of theme for me doesn’t really come up as I’m writing, or thinking of how to write, or drafting out the stories themselves. I mostly just try to write stories about people, and situations that matter deep down to those people, and to me, and hopefully to the reader. The themes seem to emerge as the stories get written, and then assembled into books. I ultimately feel that figuring out themes are more the job of the reader than the writer. It’s often so tough to know what you’re writing about, until you have written it, and still maybe not even then.

As a writer I really only feel comfortable writing stories set in places I know well, and having lived only in the West – Oregon, California, Washington, and Idaho – I like to set my stories in those places. As well, I feel I deeply know the people and landscape of the West – whether in the cities, small towns, open lands, mountains, deserts – in ways that allow me to really (hopefully) understand my characters, and the troubles and triumphs they experience in this Western part of our country.

At times it can be a bit difficult to balance time with students, and student writing, simply because sometimes my own creative energy, and writing time, gets eaten up by time spent in the classroom, or figuring out new and interesting ways to teach writing. However, far more often than not the experience of presenting and analyzing published work to young writers, and critiquing my students’ work in progress, is inspiring, enriching, and helps me understand my own process and overall knowledge of craft as a writer.

I am actually rereading, and teaching, A Visit From The Goon Squad, by Jennifer Egan, one of my favorite novels, ever, this semester. Also, Emily Ruskovich’s novel, Idaho. Amazing! As well, I always try to keep up on the newest New Yorker short stories – Lauren Groff, Etgar Keret, Miranda July have had some awesome pieces in there these last couple of months. George Saunders’ Lincoln in the Bardo is next on my list of novels to read, I think, there are so many books on my shelves starting at me each day, saying, “Read me!”

It may sound a tad cliché, but I think I’d like to have a drink, or several, with Charles Bukowski down at my favorite bar in Boise – the 10th Street Station – just to see if Bukowski was as much of a lout, an asshole, a poet, a drunk, a charming rambling wonder, as the mythology speaks to. The hangover would be fierce, but worth it, I think.

I was a very serious break dancer in the early/mid 1980’s. We had a crew and everything. I could head spin! Also, around that breakdancing time, I was a 1-handicap golfer, which is I suppose, an interesting juxtaposition. And, I once, many years ago, was issued a lewd conduct citation – it’s a good story, but I can’t tell it here.

It’s a (probably paraphrased) quote delivered by Gertrude Stein to Ernest Hemmingway after she read a number of early stories. She turned to him, and said as she handed the manuscript back to young Earnest, “Start over … And concentrate this time.”

See above. Also, keep looking at the world in new ways, and be both humble, and confident in your art.